Given a square at [0, 1]×[0, 1] that has N points ( P1, P2, ..., PN) in the square (you may assume that different points can be at the same position), we can connect the N points and the four corners of the square with some line segments so that through these segments any two of the N+4 points can reach each other (directly or indirectly). The graph length is defined as the total length of the line segments. When N points’ positions are fixed, there must exist a way of connecting them, such that it will make the shortest graph length. We can use LEN (P1, P2, ..., PN) to record the graph length using this way of connecting. 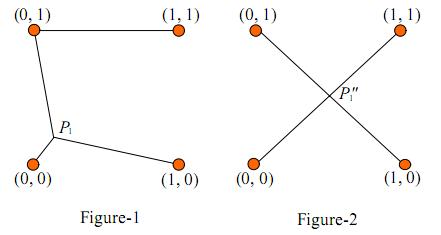 The input consists of several test cases. For each test case, the first line consists of one integer N (1 ≤ N ≤ 100), the number of points, and N lines follow to give the coordinates for every point in the following format:

A test case of N = 0 indicates the end of input, and should not be processed.