Huseyn doesn’t like homeworks so he made a bet with Rashad . Loser will be writing homeworks for both of them the entire month. Huseyn wants to win so he designed this problem they could have something to bet on. At his desk he found a cube, with numbers 1 to 6 on its faces. Cube is shown on the picture. Additionally, sum of the numbers on opposing faces is equal to 7. That means that 6 is on the opposite face of 1, 5 on the opposite of 2 and 4 on the opposite face of 3. Huseyn has put the cube in the upper left field of the matrix of R rows and C columns. The cube is initially oriented in a way that upper side is showing number 1 , and side to the right number 3 . 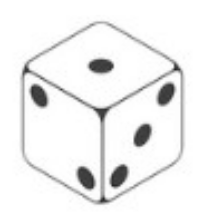 Huseyn is repeating these steps for as long as he can, i.e. as long as he can roll the cube in the next row. When a cube reaches some field, Huseyn writes down the number on the top of the cube. In the end he sums all of the numbers he had written. Huseyn made a bet with Rashad that he could calculate that sum without error. Help Rashad verifying Huseyn’s solution!

First and only line of input should contain the sum described in the task.

Numbers Huseyn wrote down are: