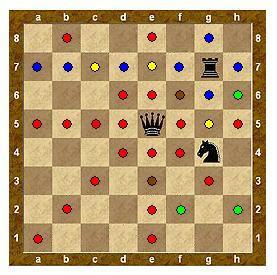 On the chessboard, the queen, rook and a knight of the same color. How many fields are under the board fight?

Rook (R) runs only on the horizontals and verticals, the knight (N) - two squares in one direction and one to the other (the letter "Г"), Queen (Q) - goes on horizontals, verticals and diagonals. By the way, the knight - the only chess piece that in its course can jump both through itself and the enemy's pieces.

The figure with red dots show the field that are under the gun (in chess terms - under the battle), only the queen, blue - just a rook, green - only a knight. Yellow dots denote the field under battle queen and rook at the same time, brown - the queen and the knight at a time.

In a single line in the international chess notation (see the example input data) are defined by a space position queen, knight and rook (in no particular order). All input data is valid.

Derive a single number - the number of checkerboard fields under their "target".