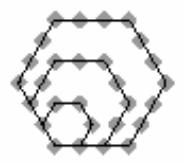 The castle consists of K levels. Each level - this is the correct N-gon, the angle of which coincides with the angle of the previous (the structure of the castle for example, input data is shown in the figure). On the sides of the first level are two rooms on each side of the next - one more. How many rooms in the castle?

Bring out a single number - the number of rooms in the castle.