You want the total illumination intensity at an objective point as high as possible. For this purpose, some of the balloons obstructing lights can be removed. Because of the removal costs, however, there is a certain limit on the number of balloons to be removed. Thus, you would like to remove an appropriate set of balloons so as to maximize the illumination intensity at the objective point.

The following gure illustrates the conguration specied in the first dataset of the sample input given below. The figure shows the xy-plane, which is enough because, in this dataset, the z-coordinates of all the light sources, balloon centers, and the objective point are zero. In the figure, light sources are shown as stars and balloons as circles. The objective point is at the origin, and you may remove up to 4 balloons. In this case, the dashed circles in the gure correspond to the balloons to be removed. 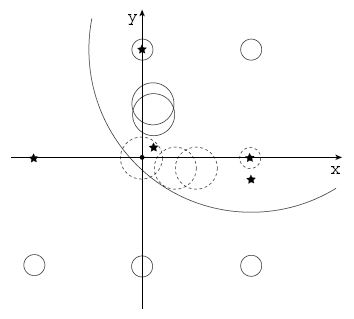 The input is a sequence of datasets. Each dataset is formatted as follows.

Each of the N lines following the first line contains four integers separated by a single space. (Six, Siy, Siz) means the center position of the i-th balloon and Sir means its radius.

Each of the following M lines contains four integers separated by a single space. (Tjx, Tjy, Tjz) means the position of the j-th light source and Tjb means its brightness.

The last line of a dataset contains three integers separated by a single space. (Ex, Ey, Ez) means the position of the objective point.

At the objective point, the intensity of the light from the j-th light source is in inverse proportion to the square of the distance, namely

if there is no balloon interrupting the light. The total illumination intensity is the sum of the above.

You may assume the following.

The end of the input is indicated by a line of three zeros.

For each dataset, output a line containing a decimal fraction which means the highest possible illumination intensity at the objective point after removing R balloons. The output should not contain an error greater than 0.0001.