Write a program that simulates Hanafuda shuffling and answers which card will be finally placed on the top of the deck. 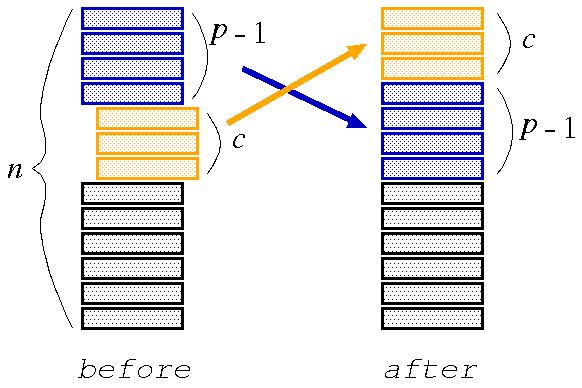 Consists of multiple data sets. Each data set starts with a line containing two positive integers n (1 ≤ n ≤ 50) and r (1 ≤ r ≤ 50); n and r are the number of cards in the deck and the number of cutting operations, respectively.

There are r more lines in the data set, each of which represents a cutting operation. These cutting operations are performed in the listed order. Each line contains two positive integers p and c (p + c ≤ n + 1). Starting from the p-th card from the top of the deck, c cards should be pulled out and put on the top.

The end of the input is indicated by a line which contains two zeros.

For each input data set your program should write the number of the top card after the shuffle. Assume that at the beginning the cards are numbered from 1 to n, from the bottom to the top. Each number should be written in a separate line without any superfluous characters such as leading or following spaces.